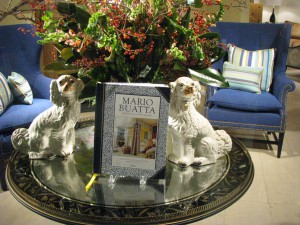 What a thrill it was to attend the great Mario Buatta’s lecture at the Philadelphia Design center in November! 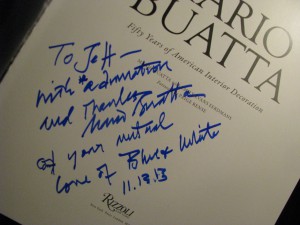 Without a doubt this man is the king of decorating, (he modestly denies this.) From Barbara Walters to Mariah Carey and Billy Joel, his rooms are colorful and “un-afraid”, rangey and full-bodied like a great wine or a good film  performance.

Be sure to buy Mario’s new book: Fifty Years of American Decoration 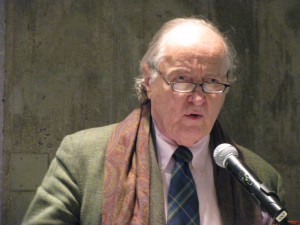 With that, he had the assembled group of over 200 in the palm of his hand. His wit and self-effacing humor seem to underscore his legendary status.

I think that’s what’s so wonderful about him, he’s authentic and accessible. No doubt one of the reasons he’s been so successful in the last fifty years! 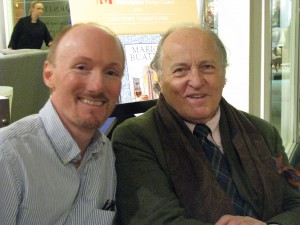 I first met Mario in 2000 at The DC Design Center and had a wonderful time chatting with him. We had hoped to all go out for drinks while he was in DC, but alas… Two days later while driving to my weekend home in Lewes, DE, Mario calls me on my cell to apologize for not being able to make it! Imagine! I almost drove off the road! The following week, knowing his fondness for gag hairpieces, I sent him a blond “surfer-dude” wig. Two weeks later I receive a wonderful note from Mario along with a photo of him in the wig at an Easter brunch in Manhattan! He told me he still has that wig as we chatted in the photo above.

The best part of our recent visit: As I was taking my leave he said, “Jeff, when you’re in NY next give me a call and we’ll go out for lunch or something.” “I’d love that Mario.” I said,  “Perfect.” he said, “And give me a few days notice before you arrive, so I have time to get out of town…” “Haaaaa!!!” “Yes, Mario.” I replied…”I’ll give you a week’s notice…that gives you time to get out of the country!”  Ooohhh Mr. Buatta….that’s why we love you!

Be sure to buy Mario’s new book: Fifty Years of American Decoration

P.S. And have no doubts…I’m taking him up on that lunch the next time I hit Manhattan!